Picking up process in the wood forest of PALO SANTO

Many of us already have an idea what the Bursera Graveolens tree is, better known as palo santo. We know where it comes from, how to use it and the benefits and properties of palo santo.

We know that this tree is use to manufacture products such as essential oils, Palo Santo incense sticks, cones, soap, among others. But I think it is not clear how the palo santo is found in the forest. Somehow this information has become viral news on the internet, giving the wrong impression that it is in danger of extinction. For this reason I wanted to live the experience by myself of how the process of picking up the palo santo tree is.

Coordinating, the town of Sacan was determined as the destination point. Starting our day very early, getting up from 5 am. to get where the gatherers were on time. Among them  Jhonny Rodríguez, Adrián Murillo (specialist) and my colleague Jean Carlos, responsible for documenting every detail on camera.

It was about 7 am and each of the gatherers began to prepare the tools they use, such as machetes and sacks. Once ready, we rode first in a car and then on a motorcycle.

Once we got to a certain point of our route, we could not advance with the motorcycles and we had to walk. During the time we were walking, in a flat part of the forest we could observe the existence of this sacred tree. 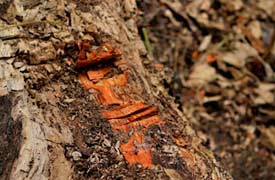 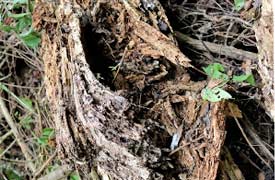 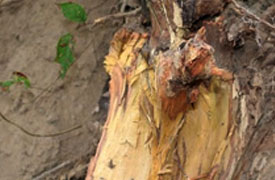 Jhonny, one of the branch collectors, explained to us that there are three types of Palo Santo trees: black palo santo, which is a young tree; yellow palo santo, which is a simple kind and is used to make incense and their sticks and cones; and white palo santo, which has little to no use because its color is rather opaque. Taking from here, according to Adrián, we can determine if a palo santo tree is female or male. The female tree is defined for having a heart, thus it's useful a source for products. The male tree is defined by having no heart, so it has no use a source for products, which is why Jhonny said:

After having walked 1 hour into the forest we found a palo santo tree that was still in its natural life cycle (living and standing). At that time we proceeded to examine it to determine the age of the tree, Adrian explained the following:

"Investigating a little there is a new theory to determine the age of a tree. This says that the diameter(circumference) should be measured about 1.40M from the head of the trunk (base of the tree). We can see that this tree has 95 cm. So this theory says that you should make some formulas to calculate age normally. I can conclude that this tree has an average age of 30 to 35 years. It is an old tree and because of the characteristics of its color, it can be defined as a female tree that will have enough oil content in the future."

A rotten branch of this tree was picked up. One of the gatherers pointed out that before the comejen arrived, the moth was already eating the wood, causing his death.

Although the branch was rotten, it could be observed that a part of it had a heart. Johnny commented that this is a good sign that the tree is developing properly. And in the future it will have a high content of oil, defining it as a female tree.

In this tree was found the presence of termite’s galleries caused by the comejen. This can usually be considered a pest, because you can think that this insect damages the tree. The people of the commune denominate the comejen as something beneficial for the palo santo tree since it eats the part of the tree that is useless, leaving the important part.

Further on we find a fallen Palo Santo tree. The gatherers indicated that because of the moth the tree had died. At the time of inspecting its condition they realized that they did not have a heart. Therefore it was called a male tree, useless to elaborate any type of aromatherapy product. Jhonny explained that the moth is a type of worm that is one of the causes of the death of the palo santo tree.

Following our search the road became more complicated, but we managed to find a tree on a hill. Adrián with the help of the gatherers inspected the tree and determined that it had indeed died naturally, laying on the ground for about 6 years after his death.

We proceeded to locate the heart of this tree and we could verified that it was a female tree. The pickers began to clean it up and chop it into several parts to be able to carry it back (it is very difficult to move the entire tree). We filled one sack with the gathered logs of this tree.

It was impressive that when we found the first tree that could be pick up, it was already past 11 am. And there was still a lot missing in our search.

It was becoming more complicated to walk and maintain balance because of the hill, unlike the gatherers who knew how to handle the difficulties that arose. They made it look so easy!. It is important to mention that we found plants full of thorns or cactus that made climbing the hill even more difficult.

After about an hour of climbing, we managed to find another tree of Palo Santo. This tree had the same conditions as the previous one and was in the right state to be able to pick up. The only thing that complicated this operation was the position in which the tree was: laying downhill. Therefore the gatherers had to find a correct position with less risk of falling or hurting themselves.

Although it was difficult to pick it up, in the objective was achieved. We performed the same procedure as with the first tree. The tree was cleaned and chopped into parts, filling one more sack, but we still had to reach the top of the hill. Gatherer Johnny told us that another tree of palo santo was in that place.

For this we had to go down a hill and climb up another one, going further into the forest. Getting at the high point of the hill we found another tree of palo santo with the surprise that it has 8 years of rest after his natural death. Finding the presence of the comejen benefits this tree, as mentioned above. The process of picking up: cleaning and chopping on parts was carried out. The curious thing is that the smell of this last tree found was even more intense. Due to its resting time it managed to concentrate even more its properties. It is the the perfect raw material to distill a high quality essential oil of palo santo.

Once the entire process was completed we were able to fill one more bag. At that time it was already approximately 1:30 pm. Therefore it was time to call it for the day and return to the starting point.It took about 3 hours to return, ending the day at 4 pm.

I can say based on this experience, this is hard, exhausting and complicated work. It is important to remember that the real threat of palo santo is the lack of information and the lack of use. If we do not resource the palo santo tree, it will be cut down  in order to convert the land into something else to generate other economic resources that serve the community.

Remember that only branches and trees of palo santo that have died naturally should be pick up. Having at least 2-4 years at rest after his death to take advantage of their properties.

If you liked this information share it in all your social networks, helping in this way to educate and preserve this sustainable resource, the sacred tree of Palo Santo Bursera Graveolens.

We’ve been contacted by customers and friends wanting to take part in this ecological action. The best ways is purchasing products made of naturally dead palo santo bursera graveolens.